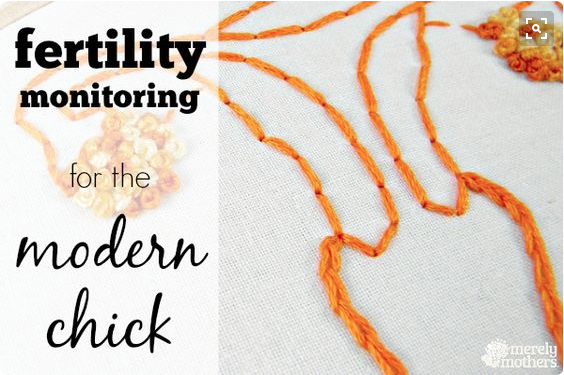 All I really remember from my school’s sex ed. classes is the video that my friends and I mocked for years that ended with the overly chipper mom telling her newly menstruating tween, “Let’s go out to ice cream!” Seriously, mom?

Lately, I’ve been wishing I’d paid closer attention, because there are so many things I’m just learning about my own body. And when you’re trying to conceive through fertility treatments, knowing your own body and its cycles significantly increases your chances of getting the timing right. Thankfully, there are some monitoring tools that can help.

One method of fertility monitoring that’s been used for years is charting temperature throughout the course of the month. Recording your temperature first thing in the morning using a basal thermometer, which gives a more accurate reading, can often determine ovulation among other important information about your cycle. Use it over a couple months and you’ll be able to predict your most fertile days.

It’s cheap; basal thermometers start as low as $7 on Amazon.

It needs to be done daily over the course of multiple months in order to see the patterns necessary for accurate predictions. Also, your basal temp should be taken at the same time every day for the most accurate results. This means waking up at your weekday time even on the weekends. Finally, you need to know a little about how to read the charts. Luckily, there’s an app for that. See fertility apps below.

EUDEMON Digital Basal Thermometer for Cycle Control: I like being able to read the backlit screen without having to turn on a light, especially on the weekends when I often go back to bed after taking my temp. It also saves 30 days of data so you don’t need to worry if you forget to write down your reading one day.

If you want to monitor multiple signs of fertility, including basal temperature, but want to leave the interpretation of all that data up to the experts, there are dozens of fertility apps available. The more data you input, the more accurate predictions they’ll provide, but most can predict your most fertile days and the day of ovulation with good accuracy after just a month of monitoring.

Most offer free versions of the app that pretty much do everything you need when trying to conceive. They’re also convenient since they’re available on your phone, tablet, and computer. And they give you piece of mind; you’re not alone in interpreting the data.

For the best results, you still should be taking your basal temperature daily, so you’re still setting the alarm on Sunday. Ugh.

I’ve tried two of these apps, Ovia and Fertility Friend. Both track tons of data, more than I ever bother to enter (does it really matter if I’m cranky that day?). And both are easy to use.

Ovia looks pretty. Its interface is modern, colorful, and fun. I particularly like the little sperm swimming to the egg whenever you pull it down to update. Unfortunately, for the first two months it predicted my most fertile days later than what they ended up being. If I weren’t using the digital ovulation test as well and were going about having a baby the traditional way versus IUI, I definitely would have missed some of the best baby-making days in the month. By the third month, though, it did adjust to my data.

Fertility Friend, on the other hand, is nothing special to look at. Its graphics aren’t fancy or fun. But it works. At least for me, I find it to be the most accurate of the two.

If it’s tough enough to wake up early on Mondays and the idea of daily temperature taking doesn’t do it for you, this last option might be your best bet. OPKs are easy to use monitors that read your changing hormone levels prior to ovulation in order to indicate your most fertile days. All they require is a few days of peeing on a stick.

Assuming you know the average length of your cycle, these monitors only need to be used for four or five days as you approach ovulation. You don’t need to wake up at any particular time to do them, and they give clear, accurate results.

The digital ones—the ones recommended for those of us undergoing IUIs due to their accuracy and ease in reading results—are expensive. Even on Amazon, the cheapest place by far that I’ve seen, they are about $35 for a two-month supply.

Clearblue Advanced Digital Ovulation Test: This monitor is great for couples and singles, as it gives not only the two peak fertility days (the reading needed for IUIs), but also the most fertile days leading up to that. It also cracks me up with its smiley face indicator. I’m waiting for it to wink at me one month or tell me to go get it on.

Whether you’re trying to get pregnant or trying not to get pregnant, it’s good to know that modern science and technology has taken a lot of the guesswork and superstitions out of fertility monitoring.

Thanks for supporting Minus Prince Charming through my affiliate links!