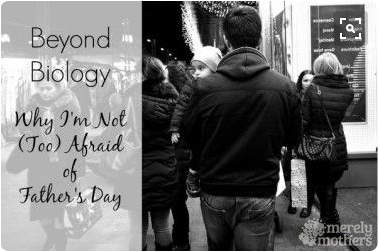 As we approach Father’s Day this year, it occurred to me that no one, aside from the social worker whose job it is to broach such tough questions, has asked me about the “daddy issue.” As a single woman hoping to conceive a child with a donor, there will be no father in our family (unless I’m lucky enough to find a husband later in life). I know, despite everyone’s support, at least a few people must have wondered how I feel about raising a child without a dad. The truth? Scared. But also steadfast.

I was raised in a family with two loving parents, a mom and a dad. So were nearly all of my friends. I didn’t even have a friend with divorced parents until high school. So the idea of raising a child in any form of non-traditional family is frightening, but that’s because it’s unknown, not solely because there won’t be a male parental figure. Lots of families don’t have dads, or have two dads and no mom. There’s no perfect equation for a family save that it be filled with love. And my child will have that, plenty of it.

Among the things people don’t want to say to a single woman trying to have a baby is that every child needs positive male relationships. While I appreciate the sensitivity to my emotions, especially now that I’m on added hormones, the fact is, it’s true. Children do need to interact with both male and female caregivers. Whether I have a boy or a girl, he or she will need to understand how to interact with guys. He or she will need to see men in relationships of all kinds to know what’s expected and accepted in our society (and sometimes, I hope, to know when to toss those expectations out the window!). He’ll need to see me interact with men in positive and varied ways to understand how different kinds of male/female relationships work, so that he can have healthy relationships himself. He’ll need to be loved by men, and he’ll need to have men in his life whom he loves in return. And I will do my damnedest to assure my child has all of these things, even if he won’t technically have a daddy—that’s what grandpa, uncle, great uncles, and family friends are for!

Yes, my brother and father’s roles of grandpa and uncle became even more important when I decided to do this without a husband. Luckily for me, there aren’t two men in the world more capable of those jobs! I’ve already been blessed to see my father take on the role of grandpa and my brother become a father. Watching the men I’m closest to transform when that little life, my gorgeous nephew, entered into our world, has truly been a gift. Sure, it’s a little sad that my child won’t have a dad as great as my father or brother. But there is nothing more comforting to me than knowing that they are who my child will think of when he or she thinks of fathers.

Father’s Day might never be an easy holiday to maneuver as a single mother by choice, but I think if the issue of a donor is dealt with honestly and the child’s life is full of wonderful men to emulate, it need not be a landmine of taboo questions or uncomfortable topics. Beyond a biological father, there will still be plenty of fathers for my child and I to honor and celebrate each June.

And, hey, an added hug for mom that day won’t go unappreciated either!