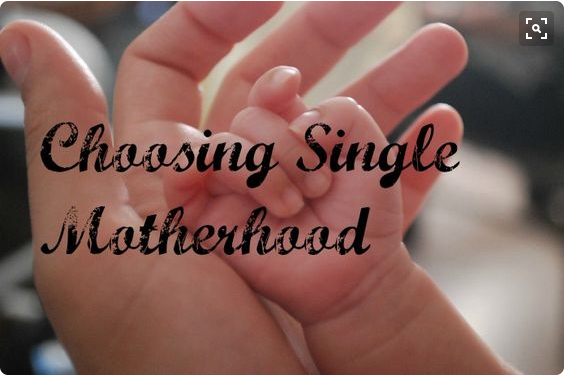 Most women’s journey to motherhood begins with a trip to the bedroom. Mine began with a trip to my parents’ basement. Unfortunately, it’s not nearly as kinky as that sounds.

While visiting my parents, I spied a pile of nostalgia on a dusty shelf downstairs: old photos, yearbooks, and my senior year psychology project. I think the project was supposed to be a sketch of our lives from birth to death, but hand a bunch of adolescents an assignment like this, and you’re just asking for a suburban girl’s mash-up of Sex in the City meets Cinderella, complete with magazine cut-outs of wedding dresses and beaus-to-be. I didn’t think of myself as overly boy-crazy back then. I certainly didn’t keep bridal clippings in my nightstand like some of my friends, but I was raised on Disney princesses, too. I knew how life was supposed to work out.

Perusing the pages I’d so proudly assembled at eighteen, I laughed at how naïve I was. I did get into a good school, but did not become the next Diane Sawyer. I never learned to wear heels, nor would I ever want a job now that would require them. The closet like Carrie’s kind of came, but it’s stuffed with hoodies and jeans in all sizes from fit to fat. Those first three steps aren’t exactly what I had in mind in high school, but I’m okay with the changes I made as I went along.

What never changed was my desire to reach steps four and five. I gave up the dream of bumping into Mr. Right, or even Mr. Big, and falling instantly in love. I came to grips with the fact I’d have to work for it. I’d have to put myself out there…and here…oh, and over there, too. I might not have exhausted all avenues, but I eventually exhausted myself. And time. Lots of time.

You can joke all you want about biological clocks tick-tocking away. But when it’s slowly becoming your reality, it’s a little less funny. So what’s a woman perpetually stuck on step three to do? Throw herself into her career, her home, her passions? Check. One master’s degree, one townhouse, two trips abroad, and four novels later, and guess what? I never forgot about those last few steps. I’m still on the lookout for my prince, but I’m also ready to move on.

Recently I took the first official step to becoming a single mother by choice. But my journey really began years ago, maybe even before I wrote that psychology project, when I decided that being a mother and raising a child was something I was meant to do, wanted to do, no matter what else came and went in my life. Maybe Prince Charming will never come. Or maybe he’ll come when I least expect it. Or maybe he’s already come (pun only partially intended) in the form of a donor willing to help me with this next step. But to mangle the words of Langston Hughes, I ain’t got no crystal ball, “But I won’t set down on the steps/’Cause I finds it’s kinder hard…/For I’se still goin’, honey, I’se still climbing’”

Even if it means skipping steps.